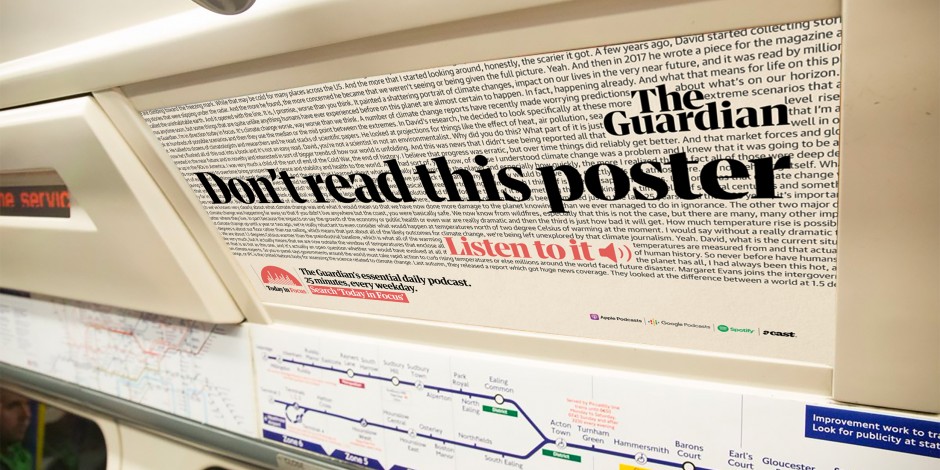 The Guardian is promoting its daily news podcast, Today in Focus, with an unusual marketing campaign urging viewers not to read its ads.

A print and out of home (OOH) advertising push from the title and in-house creative agency group Oliver, saw ads reading ‘Don’t read this poster. Listen to it’ distributed from Monday (8 April).

The creative features text from Today in Focus episodes (one on climate change and another on Brexit) – all obscured by an unmissable call to action.

The ads are running in key spots on the London Underground, looking to drive podcast listens during the commute. The creative will also appear in print in The Guardian and on social media.

Kate Davies, head of brand and awareness at Guardian News and Media, said: “I am hugely proud of the concept behind this design, especially as it is one of the first times we have taken campaign creative for Today in Focus beyond our own Guardian channels. We know people often listen to podcasts when they are on the move, so this felt like a natural next step in reaching potential new listeners during their commute to work, while also providing an impactful design for use in print and on social”.

Sam Jacobs, creative director at Oliver said that the Tube was selected as the point of publicity for the campaign to “let tube commuters know that instead of staring at their social media or avoiding eye contact with the person opposite them they could listen in and discover the story behind the headlines”.

The podcast launched in 2018, led by presenter Anushka Asthana, who examines a major news story, drawing on the expertise of Guardian journalists and correspondents from around the world.